He wasn’t my favourite Beatle. That was George. Then it was John, then back to George and then John and George.

Paul’s demo of his song “For No One” changed all that. Here was and still is a song that hits that very special and carefully guarded private place in your heart.

When first hearing the song, it reminded me of someone very special to me. It still does. We may no longer be together, but that song is not for anyone or for no one. It’s about the one I let walk away. So while enjoying the music and politics and philosophies and constantly changing ‘looks’ of George, especially, and John, it was always the songs of Paul that hooked me.

His first two solo albums, both featuring just himself and his Lovely Linda, often dismissed as being “average”, or even “mediocre” by some of his most loyal fans, offered up a hodgepodge of bibs and bobs along with some brilliant songs- “Every Night”, “Dear Boy”, “Maybe I’m Amazed”, “Monkberry Moon Delight”, “Admiral Halsey” and “Ram On”.

Those two solo albums recorded in his home studio in Scotland with wife Linda seemed to be Paul McCartney taking a break from being a Beatle and trying to chart a new career path with no plans as to what this might be.

The Beatles were a hard act to follow and each of them must have realised this when that separation became the final divorce.

John had Yoko and probably knew what he was going to do next- experiment, and break away from being fab. George was no doubt both relieved and apprehensive whereas, ironically, Ringo might have been the most chilled as, well Ringo had to continue being Ringo and the world would continue to love him.

Much, however, was expected from Paul- not nearly as much as from John.

With Yoko by his side and his contributions to the White Album, Revolver and Abbey Road and projects like “Two Virgins”, he was heading off wherever he wanted to be. He wasn’t shackled to any “fab” image. Paul possibly was.

As the writer of the Beatles’ most melodic songs, he had set the bar extremely high. The question was, could he clear it? Or even come close to it? And would there be the inevitable comparisons with John and his solo work?

It’s almost as if John was “allowed”, or expected to experiment with tracks like “Cold Turkey.” But not Paul.

Perhaps this is why the former Beatle tried working with Michael Jackson and Stevie Wonder. But these songwriting partnerships never worked out. The output was bland.

There was then what must have hit him hard: being played by “friend” Michael Jackson- and played out of owning the Lennon-McCartney publishing by the prince of Pop. If it’s any help to those who have lost control of owning their art and the need for Intellectual Property Rights to be overhauled, know everything about this story of betrayal and outdated legalese.

What did work for Paul McCartney was his work with Wings and its various incarnations. It allowed Paul to be Paul with a paid backing band.

Where Wings probably nosedived was when extremely good musicians were recruited- Denny Laine, Eric Stewart, Jimmy McCullough- and maybe, initially, happy enough to be selected by this iconic musician, but who eventually tired of being a paid sideman. They wanted their own music heard.

One cannot help but think what George Harrison must have gone through all those years ago playing “sideman” to Lennon and McCartney before finally coming into his own by writing “Something” and “Here Comes The Sun” and releasing the sprawling three disk set that was “All Things Must Pass”.

For the past few months, whenever discussing music, the work of the Beatles has always come up- how they were magical, mystical and, well, a miracle.

How the Beatles was about all the different creativity they gave the world in seven short years- the music, the experimental short-form movies now known as music videos, the setup of Apple and how their Apple inspired Steve Jobs’ Apple.

How we followed the clues and believed that “Paul is dead”.

Always, however, it came back to the songs- at least to me, the songs of Paul McCartney, one of the world’s most innovative bass guitarists, and more that good keyboardist, guitarist and drummer who has written hundreds of the world’s greatest songs.

In recent years, Macca has been everywhere. It’s like a farewell tour. His recording with Rihanna and Kanye West remains a favourite. It wasn’t the Beatles, but what is?

His appearance on Carpool Karaoke went viral because, simply put, it was exactly what the world needed to hear at that time. It was also a reminder to everyone about the importance to music Paul McCartney was and is along with his three fab friends. It put many of us back in touch with our real emotions. It was inspiring because it was real. It was about being a music fan again. 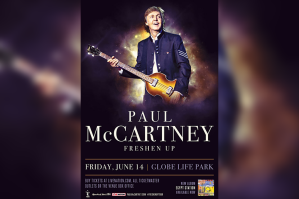 He’s not going to be with us forever, but let’s enjoy him while we can- and learn from everything he has given the world- even the mistakes- but, always, the songs that continue to say so much.

Those songs that in our moments of darkness still shine a bright light on what’s good in this world…and what should be made better. And make us believe in love and like ourselves again just that little bit more.