It’s like music festivals. There are so many around these days that music fans are spoilt for choice. There’s also a pecking order attached. The bigger the flapjacks appearing on the bill, the greater the magnet to be there. Very often just to say that you were there. An Instagram moment.

Glastonbury, Ibiza, Roskilde- it’s about the music and the vibes and the people and the location. And in what is a downturn in the economy, it’s also about value and who provides music fans with more bangs for their buck. More of everything, please, but without that price tag to attend ever becoming exorbitant. Pricing out the good times.

Of course, a music festival and a horse racing carnival or Group One event are two very different animals. But not really. The thinking is the same. To be the best. Not to be compared to what’s been seen somewhere else and dismissed as not being as good. It’s pride in ownership and oneupmanship. Having the best seat in the house. The confidence to blow smoke rings around the rest.

In Hong Kong, there’s Clockenflap. An annual three day music festival of what, over the past few years, has attracted some very good acts- 23 Pilots, Massive Attack, The Libertines, Chic etc. But there’s always been something missing. Or too much of a mish mash of everything and nothing.

Despite there being the great David Byrne this year plus Khalid, Interpol etc, Clockenflap this year came and went again with barely a whimper.

There was practically no mention on social media. No talk about how good it was. Just a shrug of the shoulders.

More and more, we’re like that man eating plant in “The Little Shop Of Horrors” saying, “Feed me”. Gluttony is good.

Of course, horse racing carnivals hardly attract fans of Weeknd, Drake, Rihanna, Greta Van Fleet etc. There might be the usual trumpeting of horse racing bringing in “younger people”, but nothing could be farther from the truth: Horse racing events attract horse racing’s elitists, the hardcore crowd and the usual hangers on who turn up for the opening of an envelope.

They’re there at Sheikh Mo’s annual tea party at Meydan. They make the trek to Cheltenham. Ascot. Newmarket. The Melbourne Spring Carnival. The Yasuda Kinen. Perhaps The Breeders Cup. The Japan Cup. Longines HKIR Week in Hong Kong. They’re there to be seen with the movers and Sheikhers. Think the Sheikhers care? Or notice?

Do these big race meetings bring in an international audience from overseas to experience the on course experience? Look under Free Junkets and Meydan. Nothing has changed. 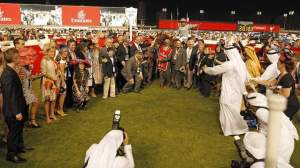 Of course, no horse racing event will have a television audience as big as the Super Bowl even it were to bring back the chariot race from “Ben Hur” for its Half Time Show. But can’t there be even a soupçon of something/anything than the small time thinking one gets served every year with a few curve balls thrown around to confuse the ordinary folks? Like recently paying Paris Jackson to be the celebrity guest at the Melbourne Cup. And the relevance of this?

Sure, one doesn’t go to a big race meeting for Cecil B DeMille to cast you as an extra. It’s probably why these horse racing Woodstocks are littered with Twitter “influencers” and human “brands” way past their Use By Date and making loud sucking noises in the direction of those 5-6 names who control horse racing, especially in the UK and Australia.

These sheikhs and laundry merchants have horse racing in these racing jurisdictions by the short and curlies.

These are the real leaders taking horse racing over the precipice and making the term “integrity issues” nothing more than flatulence. Think they’ll be around forever? Investing in losing propositions?

Godolphin, for example, is a money making organisation. It’s Sheikh Mo’s very expensive hobby. Especially Meydan. So is Coolmore. The China Horse Club is a savvy moving target. Every one of these businesses can read the lay of the land. And the tea leaves.

What might they be able to create and brand as their own and change the entire image of horse racing? Think this is not being discussed even now with very diverse business partners? It is.

The problem with horse racing is that there’s a problem with the building blocks that has created horse racing. The structure is rickety. There’s a sinking feeling. Always talking to itself. So many knee jerk reactions that it keeps kicking itself in the nuts. Over and over again.

Using HR people to go to the same old well and see who’s still there. HR people are usually mediocre employment agencies. A Director of Human Resources is a redundant title. They’re just working off an approved script filled with all the right qualifications. Except a diploma in Street Smarts.

There are platitudes like “customer centric”. When have those leading horse racing ever been “customer” anything? How many have made the time to understand those paying the bills? They’re just exorbitantly paid Yes People who are usually unemployable to any other industry. Why? Ineffective. Teflon people. Lack of people skills. Mind blown and suffering from shrinkage when confronted by those outside of horse racing asking the hard questions.

Has content and “original” programming changed in the last three decades except for adding a hashtag? How many more tipping shows hosted by “form analyists” where no one wins will be produced by racing clubs before realising that whatever audiences there might have been left decades ago? Who enjoys losing?

Who has money to throw around to keep an industry- any industry- in which they have no vested interest from closing shop?

There’s an unnecessary arrogance emanating from too many in the horse racing industry that has become intolerable. It’s all about enriching and enhancing that playground for the extremely rich. And those desperately seeking a free pass to enter past the velvet rope.

It’s time to get off that high horse. Time’s running out. Time to play to one’s strengths. No more preaching to the converted. No more episodes of The Emperor’s New Robes.

Next month, the HKJC hosts Longines HKIR week. It really should be a five day celebration and toast to horse racing- its past, present and future. Showcase the great horses and riders who have competed here. And where’s here? Hong Kong. What’s the HKIR’s USP? Its venue: Hong Kong. It’s what attracts those visitors from overseas.

Surely, and, hey, Shirley, it’s about bringing all this together and showcasing everything as something exclusive to Hong Kong. And Hong Kong racing. An uplifting and positive experience. Why else travel half way around the world?

For trainers and bloodstock agents to once again realise there’s always another sucker born every day? Those usual suspects looking for another free ride? Those pogo-ing in on their Selfie sticks?

Isn’t this kinda grubby? Like the rerun of an old gangster movie?

Of course, all this will go on. It can’t be stopped. But here’s a huge opportunity for the HKJC to swim against the tide and make Hong Kong the city where the image of horse racing changed for the better in 2018.

Horse racing cannot continue being a character from The Wizard Of Oz. It needs to be far more focussed. It must find its heart. Its soul. Its ability to care. Let this start in Hong Kong.